Hard Ton took us deep into the underwater multiverse!
It was the perfect DOLLphin Pride. Thanks everybody for coming out.

Almost all photos by Adam Moco
More on flickr. 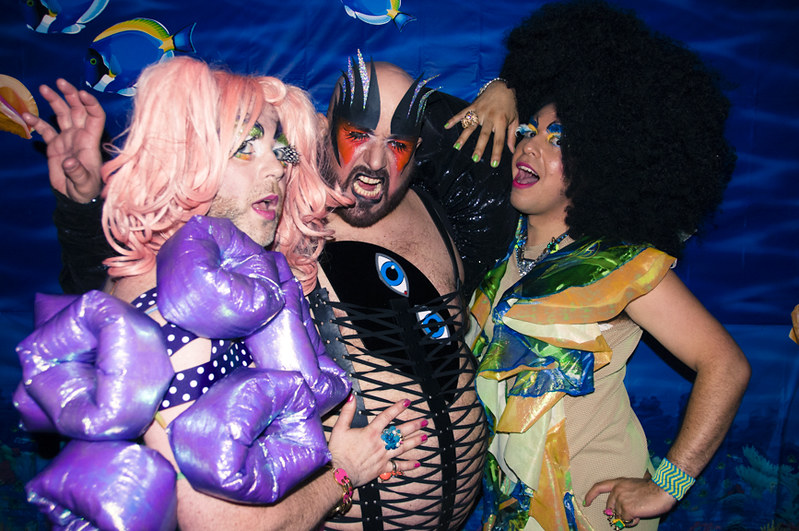 Sadly fab magazine is closing down, the last Fab issue came out last week. For this occasion all the Toronto qweenz came together for one final photo shoot.
I can’t even find Mary, Peggles and myself in the picture.

This has been the skaniest and most festive Christmas ever. CHRISTEENE kicked the xmas baubles hard. NOW Magazine writes that CHRISTEENE was like Beyonce on bath salts. Really, what more could we have asked for? Watch clips of CHRISTEENE with DJ JJ Booya performing 39-34-39 and Tears From My Pussy at Hotnuts. Both songs are from the just released album WASTE UP, KNEEZ DOWN.

The show started when Mary Messhausen took the stage – wrapped in bows. As it was the birthday of dj das hussy, we had a cake in shape of a vinyl record for our fav lezzie. Of course the cake was vegan.

Then, the Gentlelady Regina opened with her hawt buttered version of the Fiona Apple song Hot Knife.

END_OF_DOCUMENT_TOKEN_TO_BE_REPLACED

I waz so blog lazy lazy lazy that I didn’t post Mary and my looks from the Love Saves The Day party in December. So here they are.

And for the next Love Saves The Day Jaime Sin and I will be re-united at the decks after eons. Join us on the dance floor at The Beaver. Saturday, February 4th from 11 pm.

The ladies have been cunchin’ around all summer & so we decided to do HALLOQWEEN at The Beaver.
Next year, in 2014, we’ll be back with Hotnuts.

For the last few days, I could not listen to anything else but The Weeknd. It’s the r&b project of Toronto-based 21 year old singer Abel Tesfaye. He released his first free mixtape, House of Balloons, in March and the second album ‘Thursday’ followed earlier in August. Supposedly, a third long player is due before the end of the year, titled Echoes of Silence.

So, the young one is pumping it out like crazy. Got twittered, hyped, collaborated and all-in-all supported by fellow Torontonian Drake. Of course, he’s been the talk on all the bloggies and whatever else it’s called. Recently, the song ‘High For This’ was featured in the trailer for the final season of HBO’s Entourage. By now, I’m actually a little scared that I’m turning straight. Anyways, here is a pfun clip of ‘High For This’ from The Weeknd’s first ever concert at the Mod Club in Toronto, July 2011.

Most of the songs are slow, moody numbers – hot vocals, falsetto – sex & drug references on top. There are Aaliyah and Beach House samples, chunky guitar outbreaks. And this probably not the last time I’m falling for music that carries some Prince and Kanye – 808s & Heartbreak – influences.

I’m wondering, when he sings about new glass tables in ‘House Of Balloons – Glass Table Girls’, does this really mean The Weeknd is all about Glass Bottom Boats? Me thinks YES, he’s going right thurrr. Although, rapgenius says otherwise but what do they know?

If after all the downbeat druggyness you feel the need to crawl out from under the layers of smoke and get hit by a four to the floor beat, listen to the Prince Club remix of The Morning. Does the trick!

My favourites: Life Of The Party, The Zone, The Birds Part 1 & 2, Gone

My favourites: House Of Balloons – Glass Table Girls, What You Need, Coming Down, High For This, The Morning

Join us in the Toronto Pride Parade this Sunday.
I’m going to be djing on the AGYU float and Mary Messhausen is going to Pride it up.

The Art Gallery of York University (AGYU) Dreams BIG at Pride Toronto this year! AGYU and artist Matthew-Robin Nye team up with the Trans, Bi, Lesbian, Gay Alliance at York (TBLGAY), York Federation of Students (YFS), and the SexGen York Committee for the We Demand Redux with a booth at the Pride Street Fair on Saturday July 2nd to Sunday July 3rd and a specially designed float in the 31st annual Pride Parade on Sunday 3rd July 2011, starting at 2pm at Bloor and Church Street.

This year marks the 40-year anniversary of the ‘We Demand’ March in Canada. The march was comprised of about 150 men and women on a rainy day on Parliament Hill in Ottawa with placards stating ‘We Demand!’ with a list of ten required amendments to the Canadian constitution on items related to sexuality.

We Demand Redux is a series of actions, which bring attention to issues facing the Queer community today. Functioning as an education campaign, We Demand Redux honours the history of the Gay Rights and affiliated movements over its 40-year history in Canada. This open-ended campaign is an homage to the leaders of this community both present and past who have shaped one of the most progressive democracies in world history. We Demand Redux empowers the audience to create their own demands, give voice to their frustrations, and issues of interest during the Pride Parade.

The We Demand Redux demands your attention and participation! With a custom designed float and message campaign – visible through tshirts, placards, ballots, and the York University booth – the We Demand Redux looks at the past and forward to the future of Queer activism in Canada. Backing up the redux, DJ Produzentin and Mary Messhausen perform live, bouncing the truck with a heavy, house-pop remix.

DEMONSTRATE! March with us in the Pride Parade
SUBMIT! Your demands at the wedemand.tumblr.com
VISIT! The booth to cast your ballot in person.
SUPPORT! Partner with the project.

The We Demand Redux strives to provide a galvanized platform for all to draw attention to the history of LGBT activism in Canada, contemporary issues faced by members of the broad queer community, the de-politicized nature of the Pride Parade, and to reinvigorate an exciting history.

That was the perfect last Hotnuts at The Beaver, where we always felt at home. Thank you Beaver team & much love. Now, after 5 years, the magical carpet is going to take us to a new destination.

See you after the summer break at our new location in Dubai!
More pictures after the jump, gazillion more on the flickrs.

Mary and my ensemble by Mary Messhausen.

END_OF_DOCUMENT_TOKEN_TO_BE_REPLACED

This is the last Hotnuts at The Beaver. After 5 years of fun, we’re sad to leave but also looking forward to new adventures. Hotnuts will be back at a new venue after a summer break.

Make this a scheherazadian night & dress up with us for Genie in a Hotnut: Return to Dubai! Let the Fata Morgana come down on The Beaver.

For this special occasion we have two performers:

Gentlelady Regina
Her first ever performance was on the Hotnuts stage in September 2010. Since then, Regina and the Light Fires have taken the city by storm.

Doc Nancy
She’s Proddy’s drag mother. We spent months convincing her to make the trip from Frankfurt and leave the home for elderly people behind.