Today is a good a day in more ways than one.
Here is one reason: produzentin can put one more article in her press clippings folder. I think I might need a PR assistant that lends me a hand with these meticulous tasks soon, like any minute now.

produzentin is featured in an article about bloggers in the current issue of the Canadian bi-weekly magazine xtra. Click on the image to enlarge:

There IS justice in this world: My picture is bigger than bravehound’s.
The picture of Nancy and me at Niagara is also featured on xtra’s main page.
Full article also available online.
All hail to Kevin. Thanks so much.

I am devastated. This is the end.

Why can the whole interweb vote, when it was already clear that produzentin.com is the winner? I hate democracy. I’m fuming!

Congratulations to the winner, bravehound.com, whose most recent post is about a VERY interesting Nokia headset. He is Borg. Don’t judge.

Thanks to all who voted for me.
This is the end. Basta

Annie Taylor became the first person to survive a trip down Niagara Falls in a barrel. Almost 105 years later, Nancy and I wanted to be like her. So we got our asses into a barrel and took a deep breath. We got a Polaroid taken, dried our clothes after the successful plunge and went back to Toronto.

There was nothing left to do after all the excitement.
Complete satisfaction.

Going down the falls. Looking increasingly like The Muppets.

Now, back to the car, hurry.

Here are a few pictures of Nancy and me with tourists. These were the most adorable people we met. We love all people. Even the haters.

All photos by Gates of Schimbulak.

The haters gave us a dirty look.

We met these girls at Dairy Queen. They were fabulous. Lots of fun.

More cuteness. We love all cuties. Even underage.

After our short stop at Tim Hortons, Nancy and me arrived at the Niagara Falls. This is the first part of our day trip to the honeymoon capital of the world. Although I had seen the falls before I was as taken away by their beauty as Nancy.

All photos by Gates of Schimbulak.

Tomorrow, part II: Nancy, me and the tourists 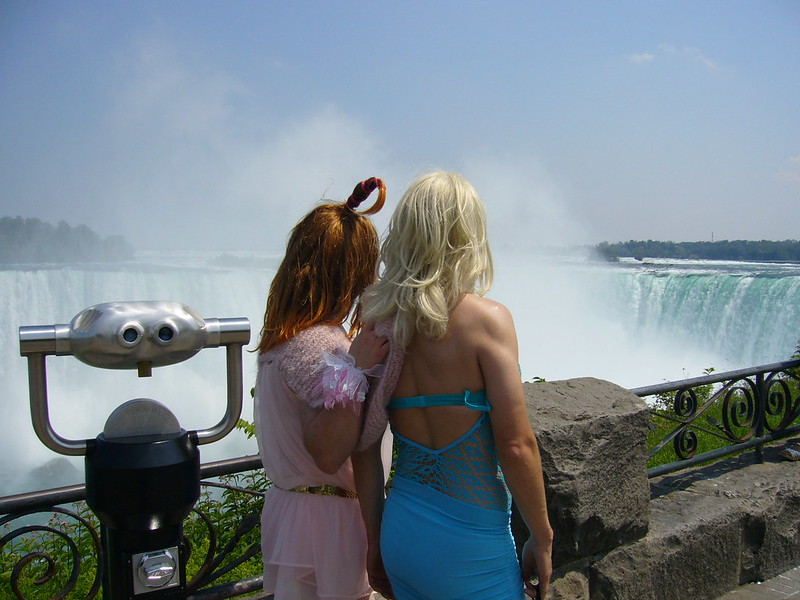 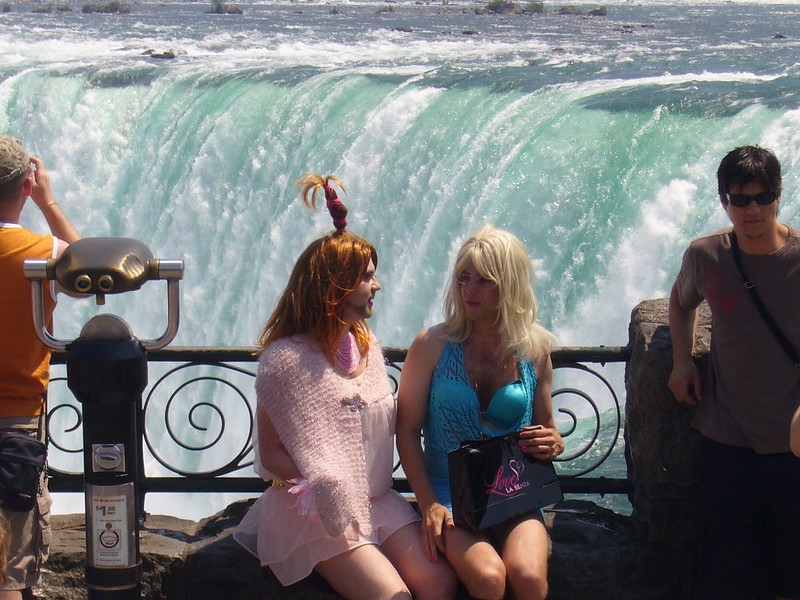 We took a quick rest to talk about the breathtaking falls 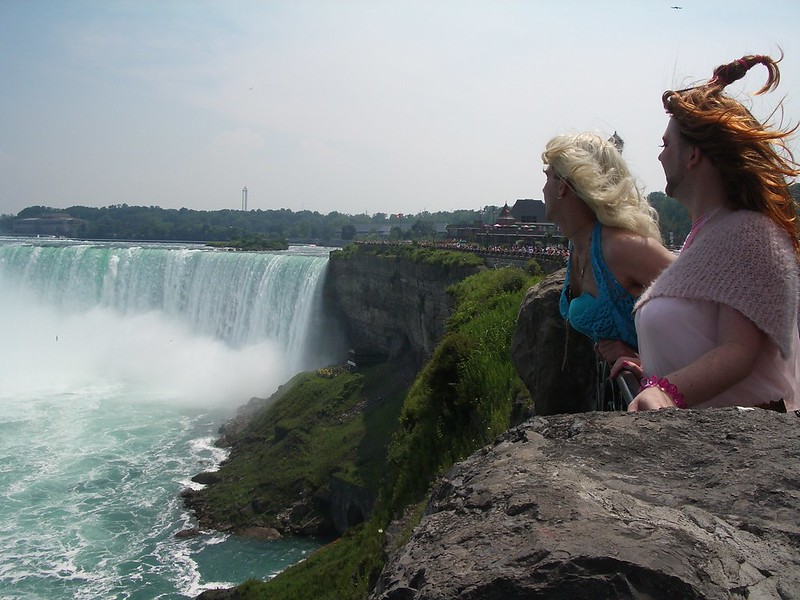 Blown away by the falls

You won’t believe how beautiful the falls are

More pictures after the jump.

END_OF_DOCUMENT_TOKEN_TO_BE_REPLACED

The latest issue of Cologne based fashion fanzine Mode Depesche was published in May (their website has an older issue for your viewing pleasure). I’ve written a column about my shopping adventures in Canada. Read the article after the jump.

END_OF_DOCUMENT_TOKEN_TO_BE_REPLACED

Taken during the Journey Behind the Falls. At the first viewpoint.
Watch a shortfilm we took at the second viewpoint.

I am not especially keen on flying but my flight from New York to Toronto was wonderful. Clear and sunny views of Manhattan, the Niagara Falls and Toronto included. I love flying.

Sunday evening we went to Danny Krivit’s birthday party at Pacha. When we left the club a cab stopped conveniently right in front of us. We got in on one side and a man left the car on the other side. As I was the last one to get in the cab, he passed my way. I only noticed him, when he climbed the stairs to Pacha. It was Mel Cheren, whose (very schwül) autobiography I am currently reading, sporting a black bomber jacket with the Paradise Garage logo embroidered on the back.
I was quite tired and not fast enough to talk to him about the book or that I would like to do an interview. Before I got my mind together he vanished into the club.

So, I spent the remaining hours of my New York trip stalking Mariah and Yoko.

I guess everyone who reads this site has seen Mariah’s MTV Cribs episode (be sure to watch the bonus footage) as I have mentioned it in 1543 posts. Now see the building where she has a tri-level penthouse from the outside. Its in Tribeca and many thanks to my well informed friend.

Here are pictures of the Dakota building, where Yoko still has an apartment, and the Strawberry Fields Memorial.

MTV should get her to do a Crib’s episode. This would be so fabulous! I am wondering if she still has John’s glasses, which he was wearing when he was murdered, lying at the windowsill.