This has been the skaniest and most festive Christmas ever. CHRISTEENE kicked the xmas baubles hard. NOW Magazine writes that CHRISTEENE was like Beyonce on bath salts. Really, what more could we have asked for? Watch clips of CHRISTEENE with DJ JJ Booya performing 39-34-39 and Tears From My Pussy at Hotnuts. Both songs are from the just released album WASTE UP, KNEEZ DOWN.

The show started when Mary Messhausen took the stage – wrapped in bows. As it was the birthday of dj das hussy, we had a cake in shape of a vinyl record for our fav lezzie. Of course the cake was vegan.

Then, the Gentlelady Regina opened with her hawt buttered version of the Fiona Apple song Hot Knife.

END_OF_DOCUMENT_TOKEN_TO_BE_REPLACED

You first saw Twista, Vixen and Snoopy of the House of Monroe at our Hotnuts Pride party in June. They set the night on fire with their drops.

Now, the three hotties are in the new Junior Boys video, Bits and Pieces.
Check it out below & some backstage pictures.

Sunday, last party night in Berlin at Berghain Kantine. ND’s birthday with a very special tequila bar by Conny and Zu from Amsterdam. After having been to crazy parties for 3 nights before, Sunday was almost impossible… But the tequila brought back our energy.

Monday morning was also the end of Girlscamp Berlin. Mary Messhausen, Toffi, Prancey Girl and myself had rented an apartment together. More on that later. For now, enjoy the pictures below, more after the jump. Even more on flickr.

END_OF_DOCUMENT_TOKEN_TO_BE_REPLACED

Finally, here are two videos of Mama Messhausen performing at MuumuuNuts. In Tiny Bubbles, Mary joins her Mama on stage and the whole rooms sings with them: Makes me happy, makes me feel fine!

The second video has Mama Messhausen on the ukulele singing The Hukilau Song. Magic!

All in HD Cinemascope below.

In a move to attract even more cute nerds, Mary wore the Lost numbers as a necklace to last nights Hotnütz party. My dress is by the wonderful PG, who was dearly missed.

Gartina took the stage super late but wasted no time to get naked. A semi NSFW picture is after the jump. For full sausage action, you have to check out flickr.

Das Hussy premiered her remix of Gentleman Reg’s We’re In A Thunderstorm to great dance floor success. Have a listen at the Arts & Crafts website and be sure to vote for Das Hussy.

END_OF_DOCUMENT_TOKEN_TO_BE_REPLACED

Thanks to all of you for coming out to our Hotnuts dipping sauce special edition. Mary Messhausen hosted the contest: plum, creamy garlic and honey mustard never tasted so good on fresh fruits.

Olive Oyl gave a theatre ready performance of “He’s Large” from the movie Popeye. Bluto made an appearance in the form of a six-foot tall dancing penis. Head over to omgblog to watch the video.

The packed dance floor was provided with heavy house beats from Bitz, who was in town from Frankfurt, and myself.

Mary and my outfit by Mary’s new line Silky Sluts.
More pictures after the jump. Even more on flickr.

bitz in bernhard, you saw this top here first
make up by margot

END_OF_DOCUMENT_TOKEN_TO_BE_REPLACED

Ok. This be crazy. It looks like Mary Messhausen shaved her head just to be in Madonna’s latest video Give It 2 Me.

My dear friend Mary left Germany a week ago and now I make this disturbing discovery. She hadn’t told me about it, because she knows I love long hair. Always have. Now, you tell me, who rocked the Lanvin sunglasses better: Mary Messhausen with short or long hair?

What would the animal series be without Mary’s favourites? So without further ado, the first blog entry by Mary Messhausen:

Growing up as a little girl in an alternative universe (Newfoundland), I used to gaze out of my frosty window to the cliff across the pond. One day I noticed little creatures fluttering about. I thought they were fairies, so I decided to have a closer look. When I reached the top of the cliff, I was surrounded by hundreds of little flying mini penguins… also known as the puffin.

The puffin stands at about 30 cm (1 foot) tall and I have a weak spot for them because they have bright clown coloured faces, their tiny flappy wings bring them all over the world and year after year they return home and breed in the same hole.

Fast forward to when I was 16. I went back to the motherland aka The Philippines. One night I was asleep in my family home when I awoke to the sound of a bird like twill. Curious to see where the sound was coming from, I strolled through the Chocolate Hills and ventured into the forest. With my trusty flashlight, I quickly found the source of this mysterious sound. High in the treetops I spotted the Mawmag, known locally as the Koboldmaki or Philippine Tarsier.

As it looked down upon me with its enormous eyes, I figured that it could fit in the palm of my hand. It was really the cutest animal I had seen since my brush with the puffin. I always wanted the people here to see this sleepy and shy monkey, so I’m going back in February to bring a bunch home to live with me in my cozy new shack.

That being said, I’m delighted to introduce you to the two animal spirits of Mary.

Went to a Karaoke bar on Saturday night with Margot, Kevin, Mary and Uwe. We rented a private room. The room had black light, wallpaper with blue skies and fluffy white clouds. Mary and I did secret shots every time we got drinks for all. The bartender asked us if we wanted harsh or light shots. Mary said: “Harsh with fruity undertones”, on which he only rolled his eyes. We went with harsh.

At one point we all sang Bag Lady by Erykah Badu. So much fun.
Watched a lot of Erykah videos yesterday. Still, one of my favourites is Next Lifetime featuring Andre 3000, Pete Rock and Method Man.
Erykah’s 4th studio album, The Kabah, is scheduled for spring 2008.

Mary Messhausen and I needed some time off. So when our gingerheaded photographer friend Kyle offered to take us to his cottage right by the water, it sounded like the perfect opportunity to leave the busy city behind.

When we arrived at the cabin we found that run-down raft laying by the lakeside. In a heartbeat we hopped on the makeshift vessel. After the first excitement wound down and the fishing was done, we totally chilled out on the raft. So chilled out that we fell asleep.

After what must have been at least an hour we woke up and could barely see the coast. We felt like the biggest gaytards ever.

Watch the desperation unfold after the jump. 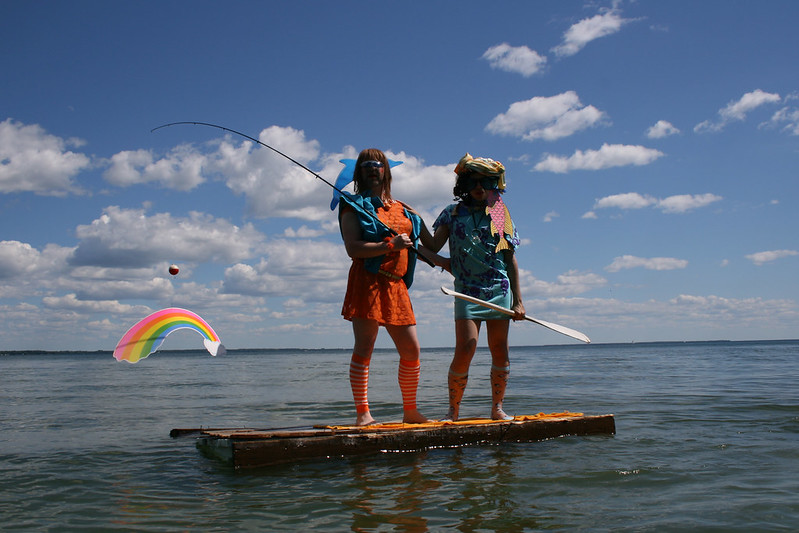 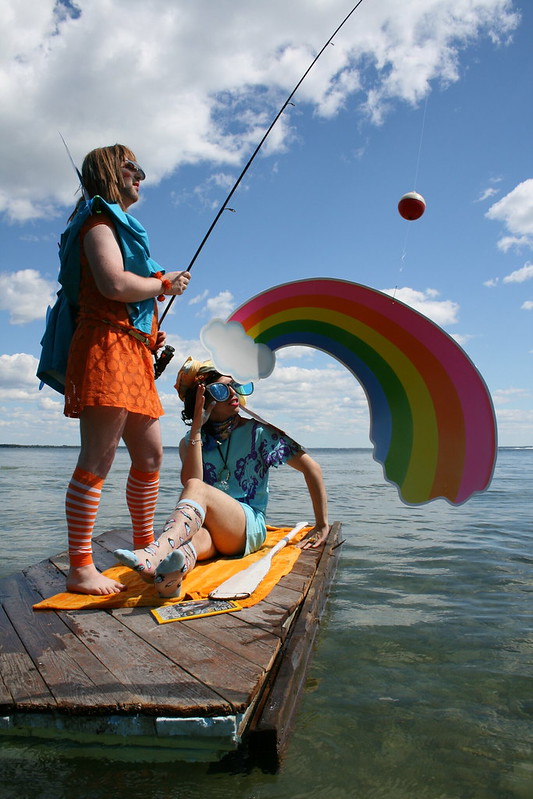 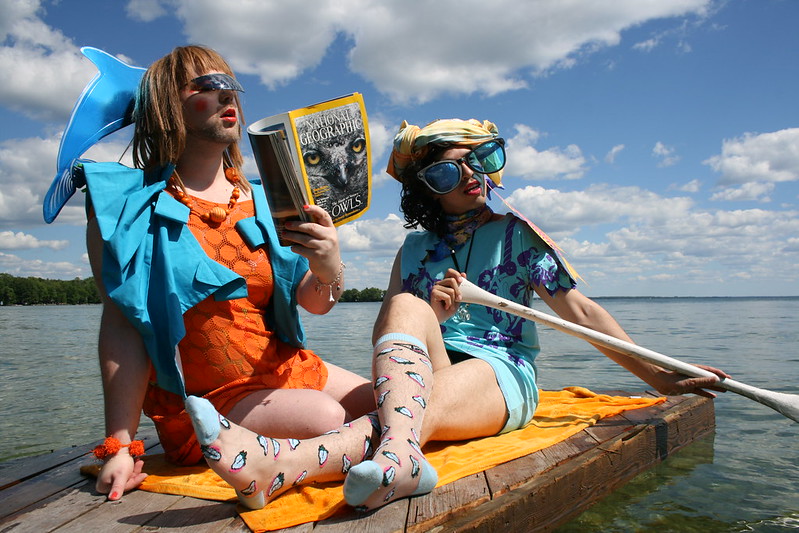 Owls on a raft, before the nap