The days of deep hibernation are over, but we’re still full on shlumpadinkas! Yes, Oprah taught us in the ways of the shlumpadinka a long time ago and now we’re embracing the art of letting go. Come dance with us in your floppiest shlumpy tent! Fall out of bed & onto the dance floor.

To fill the room with super chillaxed vibes we’re very exited to have Macy Rodman from NYC with us. The Lazy Girl video is on heavy rotation in our beds. Macy recently released the debut EP HELP.
Join us to see Macy’s first performance in Canada and get HELP!

Take this shlumpadinka quiz!
If your answer is maybe to any question you may be a shlumpadinka:
* Is your birthstone melatonin?
* Is your favourite designer bed, bored & beyond?
* Is your favourite food deep fried anything?
* Are your nighties by Ralph LauRen, the father of Kylo Ren?
* Are you guilty of the nonstop frump?
* Are you in a really anal, nonstop relationship with a chocolate bar?
* Do your new friends ask you: are you on email?
* Are you pretty sure it’s the Chinese year of the sloth?
* Is your favourite InterNetflix show Watch Again?
* Are greasy food stains on your oversized clothing just a funky pattern to you?
* Have you ever used a plate of spaghetti as your comfy cushion?
* Is your goal step count a single digit?

Join us at the Hotnuts Farm for total Pride oinkstasy – our barn doors are wide open! AVAN LAVA from NYC are gonna plow through our weed fields and tear up the Hotnuts stage! We saw them at the Stargayzer Festival in Austin last year and immediately knew we had to bring them to Toronto.

Sow, get your outfit ready because the best things in life are gluten freaky at Hotnuts Open Barn! Here are some dress up toptions to get the early turd:

All species and LGBTTIQQ2S are welcome to join the Open Barn multiverse.

About AVAN LAVA
AVAN LAVA have staked their claim as one of New York’s most vibrant pop acts—a kind of natural bridge between late night club culture and kaleidoscopic pop theatricality. In doing so, the trio of Ian Pai (producer/drummer), Le Chev (producer/keyboard/guitar) and TC Milan (vocals) have earned a fervent fanbase and managed to bring their raucous live show to points all over the globe.

The band’s current EP — Make It Real — (released in March via Atlas Chair Records) serves as a euphoric pop blueprint for their increasingly dynamic live show: a communal party experience characterized by nonstop dancing, the occasional blast of confetti, and a profound sense of joy.

Thanks for making Hotnuts Coyote Fugly!
Almost all photos taken by Alejandro Santiago
Pictures on flickr or facebook 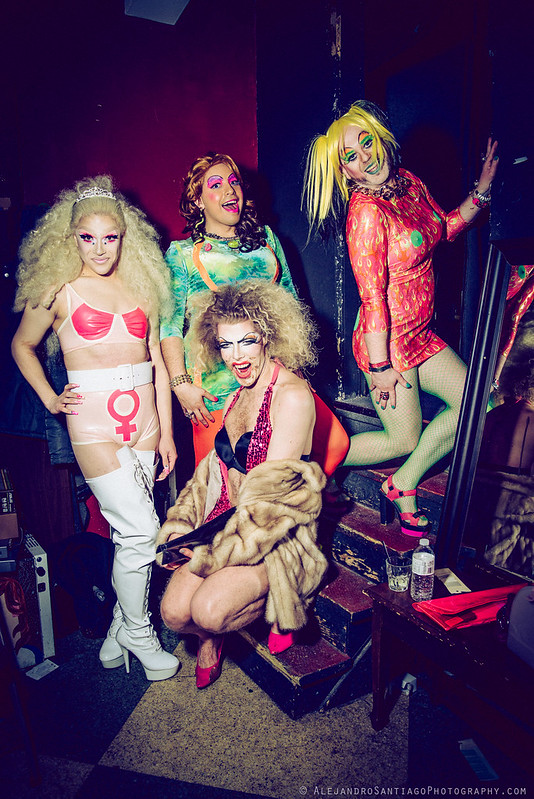 This was the biggest Hotnuts yet and we almost got lost in the WilderMess. I really wouldn’t have mind if there was no way out. So much fun at The Garrison. Thanks everybody for coming out and dressing up.

The HD stage really got the girls going. Mary re-wrote MJB’s hit into a Deep InsideHer Ass. Then, the grinding wonder Miss Jamaica took over with her 4:20 heavy jams. The staggering beats by Dj No Problem got us whining & screaming. Such a hot WilderMess!

Watch clips of Miss Jamaica’s and Mary’s performances after the jump.
Also, more pictures and all pics on flickr.

We’re back for Pride – Saturday, June 30th with extended license till 4am. Get ready for retox!

END_OF_DOCUMENT_TOKEN_TO_BE_REPLACED

All pictures by Miguel Jacob. OOC². THANKS SO MUCH. XO. Make sure to follow him on twitther.

This is the last Hotnuts at The Beaver. After 5 years of fun, we’re sad to leave but also looking forward to new adventures. Hotnuts will be back at a new venue after a summer break.

Make this a scheherazadian night & dress up with us for Genie in a Hotnut: Return to Dubai! Let the Fata Morgana come down on The Beaver.

For this special occasion we have two performers:

Gentlelady Regina
Her first ever performance was on the Hotnuts stage in September 2010. Since then, Regina and the Light Fires have taken the city by storm.

Doc Nancy
She’s Proddy’s drag mother. We spent months convincing her to make the trip from Frankfurt and leave the home for elderly people behind.

That was the perfect 5th Hotnuts anniversary. Thank you all for dressing up and packing the Lobster Beach Resort.

Keith Cole’s performance took a couple of hours as he installed a Hotnuts birthday sign across the street from The Beaver. The scaffolding of the Bohemian Embassy never looked so beautiful. The audience inside couldn’t be happier: they got a shower of pink lobster spawn from Mary and me and hot clam chowder from Wilbur Junior. What more can you ask for, really?

Check out the pics after the jump, much more on flickr.

Mary and my dress by Mary Messhausen.
Our make up by Miss Margot.

END_OF_DOCUMENT_TOKEN_TO_BE_REPLACED

This is the second last Hotnuts at The Beaver. After the June Hotnuts, we’re taking a summer break. In the fall we’re going to come back at a new venue. Hotnuts Reloaded.

We have set up a new Hotnuts facebook page to send invites to parties and post pictures. The old Hotnuts facebook group is going to shut down soon. So please, hit that LIKE button, because we’d love to stay in touch with you.

Our 5 year anniversary is coming up on Saturday, May 28: Hotnuts at the Lobster Beach Resort.
More on that soon.

Lady Darling took the stage and made love to her sister mannequin sex troll doll. All the bingo trolls in the house were screaming: BINGO! It was almost like on Planet Bingo. Just fyi: Bingo means troll in Bingonese.

More pics after the jump and all trolls on flickr.